Richard’s style reminds me very much of a cross between Taffy Thomas and Richard Walker … the stories are well told, the audience enjoys them and so did I. … Thanks Richard.
Pete Castle’s review in Facts & Fiction (Feb. 2004).

I like him, because for me he represents the perfect “natural” storyteller: completely straightforward, very clear. Completely personal, very impressive.
Folke Tegetthoff fabelhaft Niederösterreich

Written by a student of the Berüfliche Oberschule Nürnberg after my 2017 performance at Gostner Hoftheater.
Richard Martin is a great storyteller who does his job with great passion and charisma. He takes you with him through his tales as if they were happening at that very moment. And don’t be afraid, there isn’t a word anyone of us doesn’t understand!
Download the entire review. 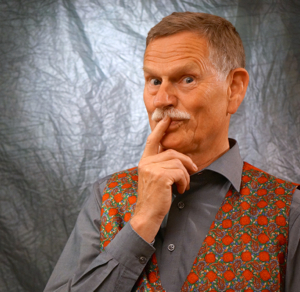 Review in the Nürnberger Nachrichten of the first Long Evening of the 2009 ZauberWort storytelling festival
A roguish gentleman on stage
Without doubt, the highlight of the evening was the English contribution by Richard Martin, who is also taking part in the “Foreign language and dialect evening” as well as performing in a solo gig. Martin may have been living over 30 years in Germany, but when, as in his solo performance,  he takes the stage, lights a candle and begins to draw on his rich fund of stories, the listener’s imagination is truly fired. The one precondition that you understand English is no problem – the roguish gentleman on stage explains even the most difficult expressions with such natural ease that everyone follows the story.
Whether stories of King Arthur, scurrilous tales or simply a joke – the far-travelled storyteller is a knock-out. A cheeky tilt of the nose, a twinkle in the eyes, the eyebrows in constant movement: Richard Martin’s expressive acting adds the spice to his tales. Words and pauses wielded with razor-sharp precision. The humour is typically British, the time flies in an instant, the listener is spell bound. Well done!
Nürnberger Nachrichten

Once upon a time / Fantasy and melody
Ripu Daman Singh’s review of a 2009 performance in Erlangen, Germany
My mum always says that I was an “easy child”. Not because I gave clear signals before wetting my diapers or turned maroon while fibbing, but the fact that I never needed company. I was always in a “Once upon a time” world — daydreaming. I obsessed over stories that started with “Once upon a time, there lived a”.
Richard Martin caught my weakest vein, when he opened his tale with “once upon a time”. It seemed like déjà vu. And I gave my verdict right there: he’s a fantastic storyteller. His stories may be slightly old and rusty, but he keeps them alive by the way he tells them. There is an uncanny charm to his words that spin colorful yarns and vivid pictures in your head.
It’s as if he has the power to control your mind and imagination. Or to put it more graphically, let’s say he has the key to the pack of wild horses that always run in your mind. He tames them with his carefully chosen expressions and gives them a direction.
So when he says, “I know what you’re thinking,” trust me, he is not kidding. From the land of fairies to the riches of majestic kings and to the land of nowhere, he travels faster than light through his stories. And if you believe his words like the Gospel Truth, then he carries you along in his backpack.
But just when you think it’s time for a breather, Vera, the musician, rolls up her sleeves to pull the strings of your heart. Indeed, she produces the most heart-wrenching tunes through her violin and flute. And when her voice breaks into an offbeat Russian song, you realize that music has no boundaries.
It’s a heady cocktail of fantasy and melody. You learn a few moral lessons, a few witty excuses and most of all enjoy a few chuckles here and there. That reminds me if I ever write a book, it will start with “once upon a time” and end with “and they lived happily ever after”. Because that’s the way most of us want things to be. Or at least, Richard Martin does.
Ripu Daman Singh

Richard Martin is a magician of the spoken word … He draws deeply on the onomatopoetic strengths of English. He tells tales, or rather he lives through them, taking us as his witnesses. He told “The Frog Prince” in a variation which made one realise what the Grimms had left out as being unsuitable for young people.
Darmstädter Echo

Are you planning on bringing him here to New England to tell?
Yes, I have heard him perform at Northlands and taken his workshop there, plus heard him tell at Blue’s.
Richard is, as you would say, bloody brilliant! I adore him and would go and listen to him in a heartbeat.
How’s that for a recommendation?
An e-mail from Karen Chace, Storybug, to a New England storyteller and librarian.

Hi Richard,
just a very, very quick note to tell you how gorgeous and inspiring your story-telling was on Tuesday night!!!! You really carried us all away and we have been under your spell since then.
I was there with my trainees … their response has been like mine – they adored what you managed to convey!
Renate

The way Richard uses his voice and his gestures makes even the most far-fetched story become so real that the whole audience is with him. At each performance I am always struck by how delighted people are after two hours’ intensive listening. That is something unfortunately rare; and that is why one should not miss Richard Martin.
Bruce Pye, Head of English, VHS (Adult Education Institute) Nuremberg

I would like to sincerely thank you once again for “Tales and Music” last Friday. I’m still getting phone calls from people who attended and reports from course tutors who are telling me what students said about it in their classes – positive feedback from everywhere.
Susanne Weis, Head of English, VHS (Adult Education Institute) Bremerhaven

Even though the group was not homogenous … all had the feeling they understood everything. Richard is an expert storyteller and has the ability to take the listeners with him on a journey into a magical realm … I can recommend his performance without hesitation!
Nancy Simmang, Head of English, VHS (Adult Education Institute) Hanau

Read feedback from teenagers after a school performance