The Company of Heaven

Britten composed this work for the BBC and it was first broadcast in 1937. At the outbreak of the war it was put into a drawer and literally forgotten for nearly 50 years until it was rediscovered in the 1990s and performed again at the Aldeburgh Festival.

The Company of Heaven has a considerable spoken part, with texts by, amongst others, Theodosius, John Milton, Rhabanus Maurus, John Ruskin, Emily Brontë, Christina and Dante Gabriel Rossetti, William Blake and Gerard Manley Hopkins, as well as from the Bible. 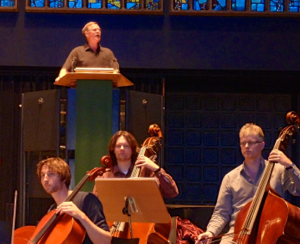 In 1997 I took part as speaker in the first complete performance in Germany, in the Stadtkirche, Darmstadt, in the presence of the late Princess Margaret of Hesse and the Rhine (who had been a close friend of Britten’s), conducted by Berthold Engel, with soloists Doris Brüggermann (soprano), Andreas Wagner (tenor) and members of the Südwestfunk Orchestra and the Darmstädter Kantorei.

The December performance was recorded, and the CD released on 24th May 1998, on the occasion of the Memorial Concert for the late Princess Margaret. This took place in the Stadtkirche, Darmstadt and included excerpts from The Company of Heaven.

I have since performed the work with other choirs, in Idstein, Johannisberg and, in October 2011, in the Kaiser Wilhelm Gedächtniskirche, Berlin (see photo) with the Berliner Bach Akademie conducted by Heribert Breuer, with Anna Korondi (soprano) and Clemens Bieber (tenor).

The cantata was originally conceived for two speakers.
However, as my last three performances of the work have shown, there are definite advantages to performing it with just one speaker. Only minor modifications to the placing of some poems are required to enhance the overall dramatic effect of the combination of text and music.

If you are looking for a speaker for this wonderful work, please mail.