Alternative thoughts about the Grimms’ fairytale

(Watch a performance of the tale)

Reading an interesting blog, The Darkness of Rinkrank published by a good Storytell friend Simon Brooks, made me take a look at the Grimms’ original 1850 publication, a very sparse text of just 817 words written in Low German. As Charles Kiernan writes in his own blog on this story, the Low German is not easy to read, so my quotations use the modern Grimms’ version.

There do not seem to be many interpretations of the story. Some psychoanalytical approaches read it as a dark tale of a father unwilling to let his daughter go. Some storytellers view the king’s focus on acquiring gold as a metaphor for capitalist exploitation. But the original text does not seem to offer much support for these views. So below are just a few thoughts which strike me, concluding with my understanding of the tale.

The king
First, neither the Low nor the High German texts supports the interpretation of the king being a malicious actor in the tale. Foolish, certainly, but no more than many a father intending to set a task for any potential son-in-law in order to guarantee his beloved daughter gets a man who is deserving of her. Certainly the text does not suggest anything about the glass mountain being a potential prison, neither for suitor nor princess. Rather it describes it in terms of the task: something to cross over without falling (darüber laufen könne, ohne zu fallen) if the prize of marriage is to be won. Both in the Low and High German texts, the man who succeeds in crossing the glass mountain shall have the king’s daughter as wife (der sollte seine Tochter zur Frau haben). Nor is there any mention in the original of a suitor’s failure leading to him being beheaded. 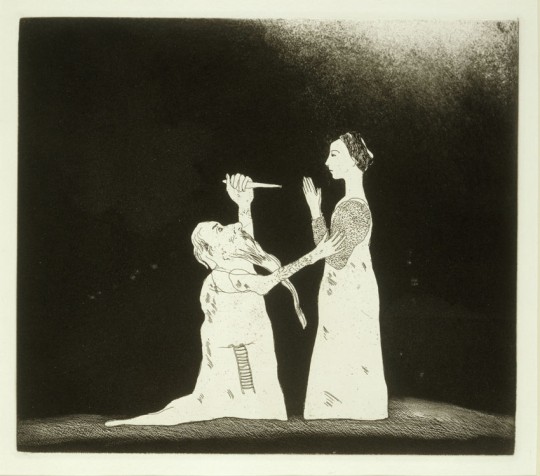 The glass mountain
Moreover, the king does not impose any task on his daughter, so this mountain really does not seem intended for her. But faced with the suitor in the tale, she declares she will cross the mountain with the young man and hold him should he fall. We are not told of the king’s reaction to this, so it seems that he is in agreement with the two making a joint attempt on the task he has imposed. Above all, the text suggests we are reading about a task which was not ill-intentioned but which will have unintended and terrible consequences.

The inevitable catastrophe happens: the princess slips, the mountain opens, she tumbles inside and the mountain closes again. The suitor cannot see where she is and lapses into inaction, doing nothing more than weeping and wailing (Da jammerte und weinte er so sehr). We are told that the king was also very sad (der König war auch so sehr traurig). His reaction is to have the glass mountain broken up in an attempt to rescue his daughter, but this fails because the two of them cannot find the spot where she fell in. In fact the text says he ließ den Berg wieder wegbrechen. The word wieder (“again, once more”) suggests that he wishes to restore things to the way they were before his foolish decision to build the glass mountain in the first place – a recognition of his original folly.

The princess’s new life
Meanwhile the tale follows the princess as she descends to a large cave and meets “the old fellow” (ein alter Kerl) with the long grey beard. Given the choice between servitude or death, she opts to cook and clean each day while he goes up his ladder to fetch gold and silver.

We are then simply told (as I wrote above, this is a very sparse text) that many years pass, that she has become very old (ganz alt geworden war), that he calls her Frau Mansrot and she should call him Old Rinkrank (da nannte er sie ‘Frau Mansrot’, und sie mußte ihn ‘Oll Rinkrank’ nennen). While it is unclear how long these names have been in use, the text does not indicate that this is suddenly begun only after so many years. The impression is far more that their relationship has developed from one of his dominating over her servile status into a level of familiarity in which nicknames are used by both of them. It is within this subtly shifting relationship that she gradually assumes an element of independent agency which will lead to her release.

Their names
At first the meaning of their names seem puzzling, both in English and modern German. But in Low German less so. Here rank means long and thin (later in his rhyme, Rinkrank refers to his long legs). In the associated Friesian language, rink is an adjective meaning poorly, weak. So Oll Rinkrank could be something on the lines of Poor Old Skinnylegs.

Regarding her name, in Low German man means not only man but also moon, and rot means soot. Is it too far-fetched to see him addressing her as something like Dirty Moonface? (Now when telling the tale, I suggest her face has become dirty from her constant work at the fireplace, and he calls her Sootyface.)

She acts
But now the princess is no longer the passive slave who carries out her master’s orders. We read that one day when he has again gone out, she not only makes his bed and washes up but goes around the house and locks all the doors and windows. All, that is, except one small sliding hatch-like window which lets in light – this she leaves open.

When Old Rinkrank returns and finds the door closed, he tells her to open it. “No,” she replies. “Old Rinkrank, I shall not open the door for you!” He then utters his three curious self-pitying verses which also refer to the housework she is meant to do:

Differing translations have been offered. Mine, helped by this one, would be something like:

“Here I stand, poor Rinkrank
on my seventeen-foot long shanks
and my weary foot:
Frau Mansrot, do the washing up!”

That she does not do. He runs around the house, sees the small window and tells himself he must peep in to see why she will not open the door. As his long beard prevents him from poking his head through, he first pushes that through the gap. At this point she confronts him (da kam die  Frau Mansrot herbei), pulls the window shut with a cord she has attached to it, and he is trapped. She says she will only free him once she has the ladder he uses to climb out. When he at last tells her where this is kept, she ties a very long cord to the window, climbs out of the mountain and from the top pulls the cord to release him.

The ending
The tale now finishes in five sparse sentences. She returns to her father and tells him all that has happened. The king is very happy (Da freut sich der König sehr), and the suitor also is still alive. They go and dig down into the mountain where they find Old Rinkrank with all his gold and silver. The king has him killed, the treasure is taken home, the princess marries the suitor and they live “happy and prosperous and in peace.”

And what does it all mean?
Like all fairytales, plenty of room here for interpretations, all of which can add something to our understanding. But I read this strikingly short text as a representation of the quotidian reality facing many girls, both then and now. First we read of a father’s folly in setting the test of the glass mountain for potential suitors. The unintended consequence is his daughter’s loss and enslavement in a domestic situation. Her entrapment in daily housework, the master’s daily departure to a wider world in order to bring back money, all of this seems easily understood as a metaphor for the experience many young women were (and are) consigned to.

Yet this is a tale which shows how within that context a helpless girl develops from being a powerless and passive slave into a woman capable of action.

A few hours after posting this article

I am sure many storytellers will know this experience. I wrote the article because Simon Brooks’ blog sparked my interest in a tale I did not know. I read and I wrote and I published – all without considering the tale as one I might ever tell.

Once I had published it, however, I went for a walk in the woods. And only then did I begin to think what I might do with the story if I ever told it. And having started by saying to myself “Once upon a time there was a king who had an only child – a daughter he loved dearly …”, well, the ideas kept coming and coming!

Watch my first performance of the tale was at Gostner Theater, Nuremberg.

So again, my thanks to Simon Brooks and the ever-stimulating discussions of our art on the Storytell listserv.

And also to Daire, who sent me this interesting article on the tale:
Her Story, Your Story, Our Story: An Afternoon With Women Who Have Escaped The Troll
© Regina Ress and Art by Emily McPhie

It is from the Healing Story Alliance.