Kuan Yin – the goddess of compassion

Kuan Yin a princess who had great compassion for all in need. Repeatedly left palace to distribute alms. 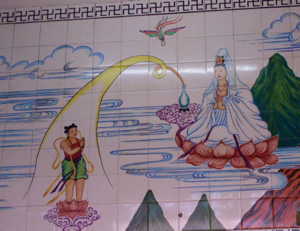 Father forbade this unseemly behaviour, so unfit for a princess, but she continued.
His advisers suggested he stop this by taking away any money, forbidding others to give her money and locking her room – make it impossible.
Yet her faithful servants left money on the table (not to disobey king) which she took and somehow always managed to escape and distribute to those in need.

Advisers then suggested marriage, husband would prevent this.
She refused to marry.
King in rage disowned her and cast her out.
“Father, I shall leave here but take you with me in my heart for I shall always love you.”
Years later king developed terrible illness, disfigured and covered with hair. Doctors helpless.
At length a monk appeared with herbs and roots. “These will cure you, but only if they are boiled with the eyes and arms of one who freely sacrifices their life for your cure.”
None could be found willing to make the ulitimate sacrifice.
At length Kuan Yin heard, came to palace, told guards to take her arms and eyes and make the medicine.
They cut, they gouged, they boiled.
King was cured – because one had willing sacrificed herself for his well-being.
He demanded the family of this noble person be brought before him – was told it was Kuan Yin.
Realising his terrible wrong, great remorse in his heart, the King prayed to the God to bring back his filial daughter whom he had disowned, and to take his life instead.
He prayed with such compassion that he moved the God in heaven and God gave him back his daughter.
But God not only gave her back her two eyes, gave her a third eye so she could see further.
And not only her two arms, God gave her ten thousand arms so she could reach out and help more people.

I was told this Tao Buddhist story while looking around the Kuan Yin Temple, in the UNESCO Heritage City of Penang, Malaysia.
The teller was David Low, who was giving us a guided walk around his fascinating city (and telling quite a few tales as he went).
David is part of the Penang Heritage Trust, a group of volunteers striving to preserve their past for present and future generations.
If you’d like to book David for a tour of your own, send him a mail.

There are many tales connected to Kuan Yin, with both her name and gender varying. Explore some more on this Wikipedia page.