Jack went home from the pub. He was there in the evening. He wanted to take a shortcut and went home through the graveyard. 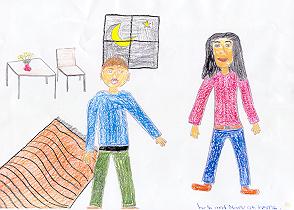 Suddenly he heard a voice: “Jack Culhaine, Jack Culhaine!!”
Jack was very frightened, so he ran and ran away, out of the graveyard and ran home. But he forgot his walking-stick in the graveyard!
Ten minutes later he was home. His daughter Mary stopped him being so frightened.

“My stick!” He began to speak, “I forgot it in the graveyard. And …”
“Oh dad! I’ll fetch your stick”, Mary said and ran out into the night.
“No Mary, don’t do that!” But it was too late. Mary disappeared.
Mary ran as fast as she could to the graveyard. Two minutes later, she was there. She opened the door and saw the stick. But when she wanted to take it, she heard a voice. It came from a grave.

“Mary Culhaine, help me out!” She didn’t want to do it, but she had to.
“Give me your hand.” She put her hand into the grave.
Suddenly there came another hand and took hers. The arm pulled and pulled on her arm and grabbed her body. Now she saw the thing, it was a dead body.

The dead body said: “Now we can go to town.”
At the first house the dead body began to sniff. He said “Go on, Mary!”
“What do you want?”, Mary asked. He answered, “I am looking for a house without a cross or holy water or a bible.”
And then he said “Straight on, Mary Culhaine!”
After eight houses he sniffed and said “Stop, Mary Culhaine! That’s the right house.”
He began to laugh. Mary didn’t want to hear him, but she had to hear it and it was so scary for her. It was late so Mary said “You can’t open the door, it’s locked.”
“No door is locked for me on this night,” he said. After that he used his bad magic and opened the door. Then he said, “Go in, Mary Culhaine!” She didn’t want to do it, but she had to do it.
And they came into the little house, and the dead body said to Mary, “Mary Culhaine, go into the kitchen and make me some porridge!” Mary didn’t want to do that, but she couldn’t stop herself. And the dead body sat down at the table.
Then Mary began to make the porridge. She put milk and water into a big pot. After ten minutes the porridge was ready.
Mary went with the skeleton upstairs into the bedroom of the three boys. 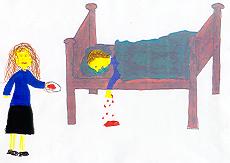 “I need blood for my porridge”, said the skeleton. Mary had to cut a finger of a boy. But what could she cut the finger with? She saw a razor in the moonlight and cut the first boy’s finger.
She didn’t want to, but she had to.

Suddenly he was dead. And she put the blood in a bowl. Now she went to the second boy and cut his finger, too. Now came the last boy. She did again, what she had to do with the second boy. He was dead, too.
“Take me down into the kitchen, Mary Culhaine”, said the skeleton. She didn’t want to do it, but she had to.

Her feet moved alone. “Let’s go, Mary,” said the skeleton.
She came downstairs with the blood in a big bowl. She went into the kitchen. Then she poured the blood into the porridge. After that the dead body said to her, “Now we must eat it.”
The skeleton took a spoon and the bowl with the porridge. He ate and ate. And he smacked his lips.
Then he said, “Mary, eat it, too!”

Mary took a spoon and a little bit of porridge with the blood. But she didn’t want to eat it. Mary was clever, and she didn’t eat it. She took her scarf and filled the porridge into it. So she didn’t have to eat it, but the dead body thought she was eating it. Mary hid the scarf behind a chair.

Then Mary Culhaine and the dead body came back to the graveyard. “And now you must come with me into the grave”, said the dead body. She had to go into that grave, where it was cold and dark? With the dead body? She didn’t want to, but she couldn’t stop her legs. Very slowly she went to the grave.

“Cock-a-doodle-do!” The sun came up and the power of the dead body disappeared. Mary Culhaine fell down and her hand found her father’s stick. She stood up, took the stick and ran home.

She came to the house without cross, bible or holy water. And she heard a voice, “Our sons are dead!” She remembered and went into the house. “I know how the boys can come back to life!” she said. Mary Culhaine went into the kitchen and found the scarf with the bloody porridge. She took it and went upstairs. And as the bloody porridge touched the lips of the boys, they came back to life.

I first met this story, aka Mary Culhane, when the late (and much-loved) Chuck Larkin posted his version on Storytell.

I told my class the story. They then split up into eight groups and each group wrote part of the story and some pictures.

These children are the same class who were my audience on the video, The Strongest of Them All.