Two tales: a Japanese tale of greed and an Ethiopian tale of redemption

A selfish woman died. Years later, when her son died and went to heaven, he discovered his mother was not there but in hell.
He asked Buddha to please move her to heaven. Buddha said that would be possible only if it could be shown that the woman had performed at least one kind act during her life.
After much investigation, it was discovered that her only kind act was that she had once given a leek to a beggar. The leek was found and lowered to hell by Buddha. He told her to grab one end. He held the other end and began to draw her up out of hell. But then the leek broke under the woman’s weight. It broke because it was rotten, which was the same reason the woman had given it to the beggar. 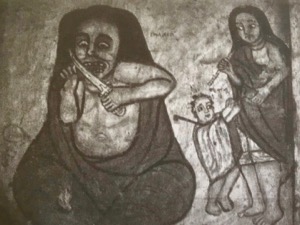 Beilya Sub, rich, Christian, but a cannibal.
Ate everyone he could, eventually even his wife and children.
No one left to eat – forced to go hunting – came across beggar.
Beggar’s body was leprous, sores, stank. Beilya Sub didn’t eat him.
Beggar begged for water – Beilya Sub refused.
Beggar invoked name of Virgin Mary – Beilya Sub recalled her mercy – gave beggar a couple of drops of water.
Eventually Beilya Sub died – went to Hell.
Virgin Mary saw his suffering – begged Christ to redeem him.
Christ sent for scales – angels placed all men Beilya Sub had eaten on one side – the two drops of water on the other side.
“The scales tipped in the cannibal’s favour.”

Photo and final line are © Philip Marsden, taken from his fascinating book The Chains of Heaven (p. 219) and used with his kind permission. (Philip’s next book, The Summer Isles, is a celebration of Irish and Gaelic folk tales. It will be published in October 2019 by Granta.)

Selfish Woman in Hell: my thanks to two Storytell friends for this story.
Richard Marsh posted the text above, adding: “I found in Japanese Mythology, a comprehensive illustrated collection by Juliet Piggott (Paul Mamlyn publisher, London 1969 SBN 600 021 130). She says it’s the first time this story has been published in English, and it is Buddhist in origin but indigenous to Japan.”
Fran Stallings added this:
“This variant is much more cynical than the one I heard from Hiroko Fujita featuring a man whose one kindly act had been to refrain from stepping on a spider. The spider later went to heaven. Looking down, she took pity on her benefactor suffering the torments of hell and dropped a silken strand to him. Miraculously it held his weigh as he climbed out of hell, but when he felt the tug of other damned souls trying to escape and shouted at them to leave HIS rope alone, it snapped.”