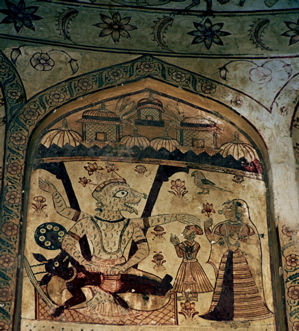 When Lord Vishnu the Preserver had killed a particularly powerful asura, or demon, the demon’s elder brother, Hiranyakashipu, swore to avenge this death. While commanding the other demons to create havoc on earth, Hiranyakashipu prepared himself for the battle with Vishnu by practising severe austerities, so gaining the most tremendous powers.

For scores of years he stood motionless on Mount Mandara and, though ant hills, grass and plants grew on his body, he would not stir. The rivers and oceans trembled, the volcanoes roared, the earth shook, the astral bodies went astray. The fiery smoke emanating from Hiranyakashipu’s very head left a massive trail of destruction.

The panic-stricken devas or gods, led by Indra, finally approached Brahma the Creator. Warning him that the worlds of his own creation would soon become extinct, the devas pleaded with Brahma to intercede. Brahma, declaring himself pleased at the immense austerities practiced by Hiranyakashipu, agreed to grant him a wish – in the hope that Hiranyakashipu would stop terrorizing the world and the devas.

To make certain of his own immortality, Hiranyakashipu then asked Bramha that he should not be killed by man nor animal neither in the daytime nor at night neither in his house nor out of it neither in the air nor on earth neither from above nor below.

This boon Bramha granted to Hiranyakashipu. Arrogantly convinced that he now had nothing to fear, Hiranyakashipu found it beneath his dignity to ask that the boon should confer on him the power to withstand Vishnu.

Hiranyakashipu and his asuras lost no time in bringing the entire world under their jurisdiction, dominating the devas, and creating a reign of absolute terror. This time, feeling betrayed by Brahma, the devas approached Vishnu, who told them that the seeds of Hiranyakashipu’s destruction were planted in his own home. For if virtuous parents do not always have virtuous offspring, wicked-minded fathers do not always seed wicked-minded children. Hiranyakashipu’s own son, Prahlad, was a devoted follower of Vishnu. In spite of all persecution, Prahlad refused to accept his father was more powerful than Vishnu. One day as the sun sank in the west, Hiranyakashipu was finally so angered by his failure to control his own son that he drew his sword.

Whilst the gods can bless – they can also punish!

I heard this story in the Indian village of Parsurampura in Rajasthan. Our guide, Krishan, was giving us a fascinating tour of the havelis, the painted houses for which the Shekhawati region is famous. In Parsurampura he took us to the memorial cenotaph of a local leader or Thakur, Sardul Singh. One of the paintings (see photo) on the beautifully painted domed ceiling shows the fourth avatar or reincarnation of Lord Vishnu as Narasimha.
Sheltering in the cenotaph from the monsoon downpour, Krishan told us the story.

The above outline relies on the notes I wrote down afterwards with Krishan’s help, plus a few versions I found on the internet. This page is just one of several.
Incidentally, Hiranyakashipu is sometimes spelt Hiranyakashypu.

Krishan works as manager at Apani Dhani, an eco-friendly hotel in Nawalgarh. Their website gives a lot more information about the Shekhawati region.