Once upon a time, when wishing still helped, there was a carpenter. His whole life, he believed in his greatest wish – to meet the king.
The time went on and he never met the king.
But one day, he said to his wife: “I’ve got an idea, to meet the king. I’m going to lock myself into my workshop. Don’t come in, or knock on my door during this time, please.”

So he went into his workshop. He stayed one day. At night he didn’t come out. The second day, his wife was worried, but she thought about her husband, that she wasn’t allowed to come in or look for him. So she didn’t come in and also didn’t knock on the door.
The time went by.
The third day, finally the carpenter came out of his room. In his hands he had a wooden box. He said to his wife: “This is my present for the king. I’ll go to the castle now, and give it to him personally.” So he went away.
So the carpenter walked to the castle. When he arrived, he knocked at the door. 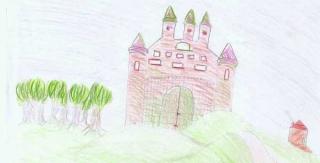 A butler opened, “What do you want?”, he asked.
“Oh I’ve got a present for the King”, the carpenter answered. “But I want to give it to him personally!”

So the butler said that the carpenter should come in.
As he arrived he said: “Oh now I’m here, it was my greatest wish to see you, and I’ve made a present for you, but first open it when I’ve gone.”

“Thank you, I’m very happy about that”, replied the king. So they talked for few minutes. Then the carpenter went home happily.

The King opened the box and saw the wooden ball. He took the ball out of the box and was so surprised when he saw it. It was so shiny, beautiful and full of life.
Suddenly, he saw the inscription: Give it to the one you love most!
He began to think: Who do I love most … my dog? But he’ll bite on it and destroy it.
So I should give it to the Queen. She’ll be happy! 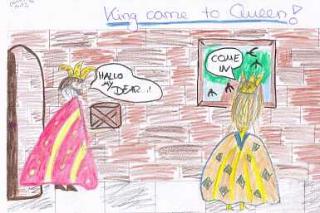 The King came through the door where the Queen’s bedroom was. He knocked on the door and the Queen said, “Come in!”
The King came in and had a red head and stuttered, “Hallo, my dear. Here, I have got a present for you!”
The Queen was very surprised. The King gave the box to the Queen and went out of the room.
Then the Queen opened it and she saw the beautiful ball.
She said, “That’s the most beautiful thing I’ve ever seen!” She looked at the ball and then she saw the inscription Give it to the one you love most!
She thought about this and she said, “I will give this ball to the captain of the guards!” 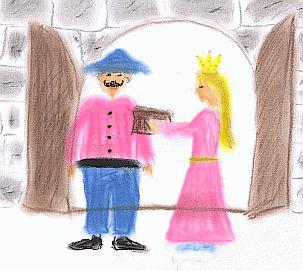 The Queen went to the Captain and gave him the box with the wooden ball in it.
She said to him: “I love you so much my Sweetheart!” The Captain locked the door, and we don’t know what they did for about two hours!

When they came out of his room, he said to her: “Thank you for the present!”, and she went away.
The Captain opened the box and looked at the wooden ball and thought this was the loveliest thing in the world he had ever seen. He saw the inscription Give it to the one you love most!, and thought who he loved the most.

Then he went to the beautiful kitchen maid!

So the captain went to the kitchen maid and asked: “Do you want a present fit for a queen?”

She answered: “Of course, but why do you want to give the present to me?”

He said, “You are the most beautiful woman in the kingdom, for me!”

The kitchen maid did her work and after three hours she was finished.
So she saw the beautiful wooden box. She opened the box and she saw the most beautiful thing she ever saw.
It was a wooden ball, she was very happy about this and then she saw the inscription:

Give it to the one you love most!

She thought who was the person she loved the most.

She thought that she should give it to the king, because he was the most powerful and nicest person who she knew.
So she put the ball into the box and went to the king.
She said: “This is a present for you, because you are the nicest person I’ve ever seen. Open it when I’ve gone.”

The king opened the box slowly and when he saw the beautiful wooden ball again, he was very angry and thought: 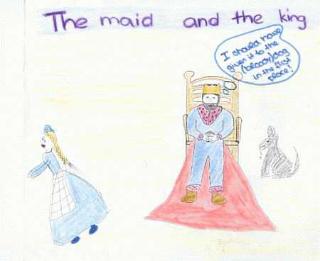 I should have given it to the bloody dog in the first place!