The area around the small town of Ljungby in southern Sweden is where, in the early 19th century, Hyltén-Cavallius (1818-1889) collected the Swedish folk tales and legends he published in 1850 as Svenska folksagor och äventyr (Swedish Folk-tales and Adventures).
Many were contributed by a local pauper, Mickel i Långhult (1778-1860).

The town now has the Museum of Legends. The work of the museum storytellers has expanded into schools, universities and old-people’s homes; an impressive achievement. 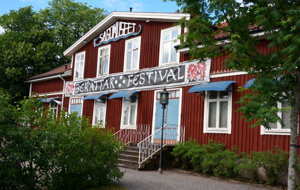 Local librarian and storyteller, Per Gustavsson (pictured right), started the festival in 1990. Out of that initiative the museum grew.

My trip to the 2013 festival began with a guided tour by the museum’s current director, and great storyteller, Meg Nömgård (pictured left). 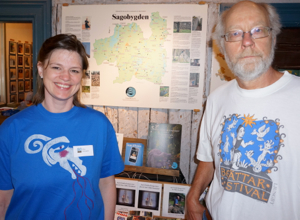 Many of the local legends are shown on this map.

The museum has created a geocaching opportunity to visit these sites and hear the stories. 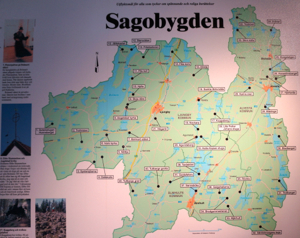 The museum has wonderful, hands-on wood carvings which illustrate the legends and folk tales.

Here UK storyteller TUUP is next to one of the giants who threw rocks at the local churches. 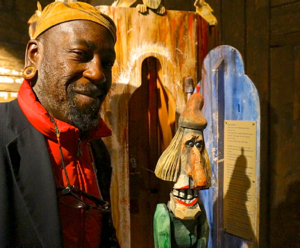 Here a carving of the king, trapped on the Magic Pisspot.

I had not heard this Swedish tale before, but is now one of my favourite tales to tell.

And here is the book in which I found the story: The Magic Pisspot: Swedish Folk Tales. 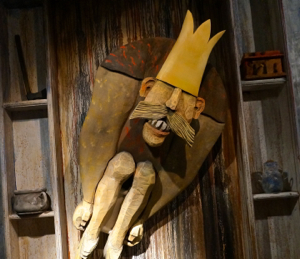 More than hands-on: this is a lindworm which the adventurous can actually crawl into. 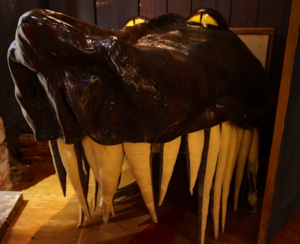 Part of the charm of the festival is the historic setting.

Some performances were in the historic market sqaure of old Ljungby, some in Eskilsgården, the house outside which voice of the later world-famous soprano, Kristina Nilsson, was discovered in the mid-19th century. 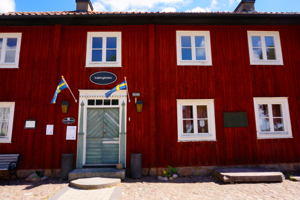 See more photos of telling tales around the world