The Umbrella and the Ten Commandments

The importance of knowing what thou shalt not do

Want to download the video?
Videos are provided free to view.

If you want to download one, I can arrange that. Just send me a mail telling me which story you’d like, and your reason for wanting a download.

I was told this joke one evening by a friend and great raconteur, Hans-Werner.
After posting it, I was delighted to hear from my father that, when vicar at St. Peter’s in Congleton, Cheshire, in the 1960s, he’d been told the same story by the parish sexton and grave-digger, Peter Coppenhall.
I took the photographs of the church’s 18th century reredos during a nostalgic visit with my sister to the town in 2015, the first return in almost 30 years.
St. Peter’s is one of the finest examples of Georgian church architecture in the country, as the church’s tour website shows, including the reredos.

My sister later found this snapshot of Peter holding his sexton’s staff, with my father wearing his ecclesiastical robes.

Peter Coppenhall also taught me how to dig graves – the first part-time job I ever had. I use Peter when opening Blacksmith and the Devil.

Another good friend, Papa Joe, kindly wrote to tell me he knew the story in an Appalachian variant included in Old Dry Frye. Others have written that they heard it told as a Jewish story.
Wonderful how tales travel around the world!

Prayer the Gods Answered is another tale Hans-Werner told me.

Yes another good friend, Thomas Hoffmeister-Höfener, enjoys telling this tale. Being more biblically versed than me, I was interested to learn from him that the Ten Commandments are numbered differently in different denominations of the church! 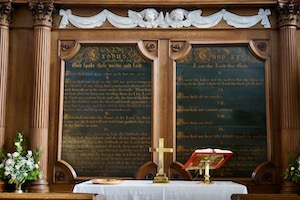 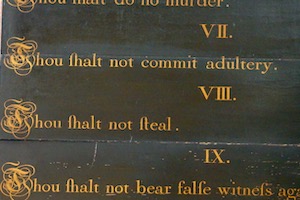 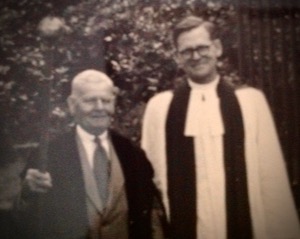