Blacksmith and the Devil

A tale which shows how a blacksmith won against the devil, and also explains those flickering flames of marsh gas known as Jack o’Lantern

Want to download the video?
Videos are provided free to view.

If you want to download one, I can arrange that. Just send me a mail telling me which story you’d like, and your reason for wanting a download.

Some years ago I came across fascinating academic research by Dr Jamie Tehrani into the origins of folk tales. He estimates that the story The Smith and the Devil dates back 6000 years to the Bronze Age. Here is an article from The Atlantic about the research.
And here is the full research paper: Comparative phylogenetic analyses uncover the ancient roots of Indo-European folktales.

Following the media interest in that research, Pete Castle added an interesting blog page on the persistence of such elements in folk culture.

This 1994 article by George Monbiot examines the role of the blacksmith in wider mythology: The Smith and the Devil.

And here is another article about phylogentic research, focusing on several other tales including the Cosmic Hunt: Scientists Trace Society’s Myths to Primordial Origins.

A Masters student in Storytelling at East Tennessee State University, Susan McCullough, submitted this performance to a socio-linguistic analysis. With her kind permission, and the University’s, Susan’s paper can be downloaded here (pdf, 205 KB).

This folk tale is told in many different variants: blacksmiths have long been reputed to be clever enough to trick the devil.
Here, however, is a Greek tale in which the devil is cleverer than the blacksmith.

I usually introduce this story by talking about Peter Coppenhall. When I was a boy, Peter was the verger and sexton at St Peter’s Church, Congleton, where my father was vicar. As a teenager, I often helped Peter dig the graves.

Recently, thanks to my sister, this photo of Peter came to light. I took it, probably in the late 1960s.

My sister also found this snapshot of Peter holding his sexton’s staff and my father wearing his ecclesiastical robes. 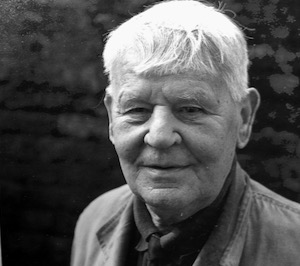 The video clips here are all amateur quality, shot in various theatres.

Their intention is just to show the range of my storytelling and give a flavour of a live performance.

Permission is granted for use in non-commercial educational contexts.

The videos are © Richard Martin.