“Close your books and I’ll tell you a tale”

The positive contribution storytelling makes to a wide range of educational attainments is enormous.[mfn]This page presents a wide selection of relevant studies, Storytelling in Education[/mfn] All who experience it, either as students or teachers, acknowledge how the classroom magically changes with words like, “Once upon a time…”.[mfn]The Web of Silence: Storytelling’s Power to Hypnotize explains why[/mfn] We are hard-wired as storytelling animals: irrespective of subject or age-group, the power of storytelling knows no boundaries. Folk tales and myths are a bridge between generations, passing on values and traditions. They provide rich, emotional material that can encourage students’ personal and social development, opening their eyes to different cultures and traditions. Many of these tales have been part of the oral tradition for thousands of years.[mfn]See The Blacksmith and the Devil, a tale academics trace back over 6000 years[/mfn] (During my many years in school I often wondered how much from our standard textbooks would last a decade, let alone centuries!) 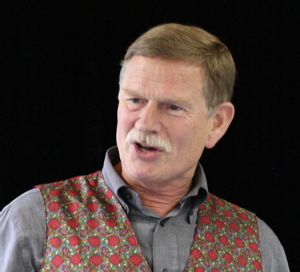 Of course, teachers of many subjects, and especially of religion, have always used stories to impart knowledge and wisdom. And yet, strangely, so few teachers exploit this to the full by actually telling a story rather than reading a text. Reading aloud to students, while valuable in itself, if actually far more difficult a skill to really master. The book remains a physical barrier to effective communication. Yet reading from a book seems integral to the self-perception of teachers: this is what we do in the classroom. As a teacher-trainer, I have had the opportunity to lead storytelling workshops around the world. I invariably meet many teachers who already know all about the benefits of storytelling, yet paradoxically do not themselves actually tell stories. Talking to them both before and after workshops it is clear why: unless they have first experienced the enjoyment of telling a story freely, without a text, they will rarely have the confidence to begin. Unfortunately, and unsurprisingly, this is precisely what so many educational storytelling resources fail to address. Unsurprising because written descriptions of “how to tell a story” are much like giving a non-swimmer a handbook and a push into the water.[mfn]One example: good materials to use but nothing about how to use them.[/mfn]

My own discovery of telling in the classroom

Like a good tale, this came by chance many years ago when I was first stumbling into performing on stage as a storyteller. During the day I taught English at a German Gymnasium, so inevitably I began to tell folk tales in all of my classes on a fairly regular basis. Although I did not at first realise either the power of the storytelling experience, nor the methodological possibilities which telling tales opened up, it was not long before I began to understand something of was happening – and what could happen in terms of the students’ language development. Soon storytelling became the characterising feature of much of my classroom work.[mfn]English teacher as storyteller: storytelling as an everyday classroom activity gives an introduction to the methodology which developed during the following three decades.[/mfn]

Probably you already read stories to your students. Perhaps you want to progress to telling them freely. Even recognising the limitations of giving advice, here are a few suggestions on how to begin.

Listening to as many storytellers as possible is probably the best way to start. Although the inevitable reaction is “I don’t know any storytellers”, in fact there are plenty around. Most professionals are members of the Erzählerverband der Erzählerinnen und Erzähler e.V. (VEE). Their website makes it easy to find a teller near you, as well as giving details of performances. Moreover, becoming aware of storytelling is a bit like having your leg in plaster or being pregnant: you suddenly see there are many others around you in exactly the same situation. So don’t be surprised that once storytelling has come up on your radar, you discover there is a lot more of it going on than you had suspected. Not infrequently there may be an emphasis on religious stories.

Invite a teller to school

Most storytellers can offer a programme of stories suited to a particular age-group and topic. Many tellers either come from a specific cultural background or have tales drawn from a specific religion. Consider inviting one to perform or to lead a workshop in your school, perhaps as part of a wider project.

You as a storyteller

One of the great advantages of storytelling as an art form is that it is so non-prescriptive. Styles of telling, like the stories themselves, vary considerably. Listening to different tellers is to realise that there is no one way to do it which you as a beginner have to follow. On the contrary, all storytellers have their own individual styles. Look to see what they have in common (their confident use of voice, body language, eye contact) and note the range of differences (some more theatrical, some more intimate). Soon you will recognise which direction feels right for you.[mfn]My dictum in workshops is that there are in fact two rules to storytelling: Rule no. 1: There are NO rules (except rule no. 2); Rule no. 2: Don’t read![/mfn]

Without the opportunity to train with other storytellers, as a beginner I had to rely on the experience  of standing in front of a class or on stage and learning what worked and what did not. This solitary process did teach me, but the way of the autodidact is also slow. One great help was discovering Storytell an international e-mail community. There someone posted an aphorism which opened my eyes to what is happening in the storytelling relationship:

The amateur tells the words
The professional tells the story
But the artist tells the listener!

I realised how this addresses a fundamental difference to what happens in most classroom discourse. There the teacher has the aim of communicating the lesson content; but telling a tale is to touch the heart of those listening – a subtle but profound distinction.

Of course, a master always makes things look a little easier than they really are. Fortunately nowadays there are many courses offered, varying in length and the level you wish to achieve. VEE offers extensive training. Other organisations in Germany like Dornrosen. e.V. or Goldmund e.V. are alternatives. In Wales, the Tŷ Newydd Centre has storytelling courses (English, Welsh or bi-lingual) throughout the year. In England, Emerson College is an anthroposophical institute which runs regular courses. Both of these place a strong emphasis on the spiritual. My own workshops are usually aimed at developing language through storytelling, but invariably also include tales with a religious dimension.

Choosing stories should always be a matter of personal preference: if the tale does not resonate with you, don’t tell it. However, to give an idea of the range of topics folk tales can address, here are a few examples from my own website. (The webpages provide either a text skeleton of the story or, more usually, a video recorded at a live performance.)

Closing the books, opening the ears and heart

When you tell a tale, watch for the magic beginning to work as students become listeners. For, as hundreds of workshop participants have confirmed, once tried, storytelling is surprisingly easy and incredibly fulfilling for all. You will love telling the story so much that, when they ask you to tell them another, you are happy to agree.

Candle in the Barn (meaning of value)

Crystal Heart (what is beauty)

Death and the Gardener (death comes for all)

King Midas and the Touch of Gold (greed)

Man who had No Luck (finding wisdom)

Many more tales to browse

This article was written as part of a project about bi-lingual religion teaching in Germany.